Traveling is a dissociative process. To sit in an airport waiting to get on a plane that will cross hundreds of miles of topography and time zones is surreal. To be a traveler requires the ability to let go of a certain amount of control. The more control you need that more your are challenged as a traveler. I flew today. From Orlando to Charlotte. Then from Charlotte to Nashville. As the plane took off from Charlotte and reached cruising speed, the pilo came on the intercom and announced that a “small crack” had appeared in the cockpit windshield. The pilots had conferred with ground and decided it was most prudent to return to Charlotte. Doh! So, we circled back and landed. Exiting the plane and looking into the cockpit, I saw a spiderweb of cracks splayed across the glass.

Amazingly, within 15 minutes, US Airways had us reassigned to another gate and had “new equipment” waiting. We were reboarded, with our luggage in the belly of the plane and off the ground in 55 minutes. Woot! The best things was I upgraded to first class and that was a first for me.

The kicker to my surreal day of travel was getting a cell phone call while in route to Clarksville and my sister’s new house…her husband wanted to know what kind of GIN, VODKA, RUM and TEQUILA  to buy to make Long Island Iced Tea. Now, mind you, this is my brother-in-law whom I have never seen drink….ever. What a hoot. I have entered some parallel universe. 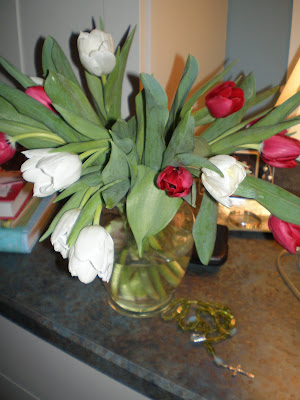