For years, my family has played a game while traveling. Much as some people collect the alphabet off license plates, we make up names for imaginary newborn babies. We have all heard the urban legend of little baby girls born and named Female, but pronounced [Fey | Mah | Lee]. While I am sure that one time a sad and illiterate woman indeed named her child FEMALE, I can’t believe we have a generation of Ashleys, Camerons and Females. But we like the game none the less because you cannot compete with reality. The twins named Utobium and Beryllium take the prize hands down. Come on people….Toby and Berri? That is sheer genius and absolute truth. The periodic elements are a perfect place to pick names for your newborn baby….if you are in high school chemistry! Anyways, some of our top choices for newborns have been Lamonia, Diabenese and Evonte. Granted, Diabenese is the actual patented name of a diabetes drug, it is still a beautiful word and possible name.

Ennui is also such a beautiful word, and if given as a name for a child, she would be a darkly dramatic, EMO,  pain-in-the-ass teenager forever stuck in that “phase” of adolescence parents loathe.

She has a half-cousin named Melancholia. One day the two mopey girls will catch the sofa in the basement on fire or shave the dog. Why? Well, they will tell you they were bored. It will make no sense. But in an odd, twisted logic, it can be exactly what helps divert the mayhem prone duo from befriending that disturbing prepubescent boy in the creepy house on the corner, named Damien. You have to give them a little latitude.

When it comes to Ennui and Melancholia, sometimes the best way to change them is to let them do something nonsensical and unpredictable. To keep them from slicing thin lines into their flesh with a razor blade or inking their skin with a ball point pen and a paperclip….you have to permit a wee bit of risk or danger. And you have to be wiling to participate.

Lesson #2: Risky Business. Whether you feel like you are hanging by your fingertips from a ledge 20 floors above ground or standing at the bottom of a 20 foot pit with no ladder to climb….to get out you have to let go and accept some of the circumstances[see Lesson #1]. Can’t you hear the stage queen in the wings of the Broadway show….”Work with it ladies!” You have to permit yourself to be outside the lines for a while. In fact, you have to intentionally color outside your own lines. Somewhere in the subversion is an exit strategy.

So, you make breakfast for dinner. You wear your Friday panties on Monday. You paint your toenails apple green. You sleep nude. If you are a vegetarian, you have a steak. You listen to heavy metal music far too loudly for the intersection of Main and Central with all your windows down. You act a bit obnoxious. You behave a bit unruly. You stick your tongue out at the world and flip it the bird. Somewhere in that Fuck You! mentality is the spark of self preservation. And that is exactly what is needed to influence Ennui and Melancholia.

Even a half-hearted Frack You! can start the slide. We aren’t looking for an avalanche, people. But chipping away at the plastering of life’s pressures frees you from other peoples’ expectations. And it is what OTHERS want (or what we think they want) from us that encourages Ennui and Melancholia to be so droopy and mopey and depressing. And living with their EMO causes all the hand ringing and worry about what it all means. Where did my happy, bright, cute little girl go? You know where she went…..she didn’t make try outs for the team, she didn’t get the boy, she didn’t make the grade, she got harassed or bullied or assaulted….or worse. And, so the defenses went up. And deep in her P.I.T.A. exterior that little girl still exists….but she doesn’t feel cute or smart or amazing. She just wants to disappear. The rebellion and the bad behavior is not the EMO…it is that little cutie pie deep inside…. furious at being encapsulated. And therefore, the self destructive behavior. She is pissed as hell and wants OUT.

If you want to breakthrough to her, you have to become comrades….you have to be willing to play. And you have to recognize that she is in there. And so, join the microrebellion. Buy her apple green nail polish or sexy push up bras or satin sheets. Get a new hair cut. Run a marathon. Take yoga lessons. Write a book. Consider doing those things that are equivalent to flipping the bird at those who detract….most importantly Ennui and her half-cousin Melancholia. Once they realize you are no poseur, that you really “get them”…..they will stop planning to burn down the house or pulling a Thelma and Louise. It is usually just a phase. 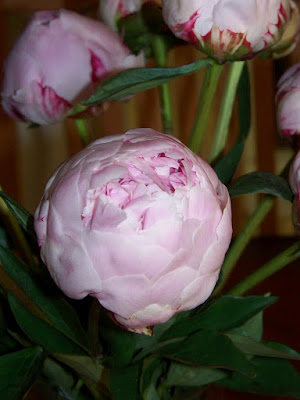