I think humans since the dawn of time have struggled with melancholy. I imagine our ancient brothers and sisters howled at the moon, wailing at the heavens and weeping. The Bible is filled with lamentations. The paper had an article today with statistics stating that the suicide rate in the 5 years from 1999-2004 saw a 20% rise for people between the ages of 45-54. Among women, the rates had climbed a horrifying 31%. I knew the numbers were high, given my patient population. As a family physician, I see and hear so much of a person’s woes. Their sadness and their fears are fodder for illness and pain. Isn’t it amazing that despite the advent of really good anti-depressants, the rates of suicide have climbed? Behind each successful suicide are many failed attempts and behind those are likely hundreds of depressed people.

What is wrong with our culture? Our society is depressed. I wonder if one contributing factor is the belief that we should NOT feel sad. It may be a modern concept that melancholia is dysfunctional. What if we treated sadness like we did happiness? We never fret over being ecstatically happy. It is just as extreme an emotion as sadness. We are equally at risk for impulsivity when happy as we are when sad (although less likely to self harm). But, if we viewed sadness as just a phase that we traverse, then it loses the anguish factor. I am not one to revel in sadness, but I have learned that ifÂ I just let sadness wash over me, it passes quicker than if I FIGHT. When I am blue I play KD Lang or Patsy Kline or Ella Fitzgerald or Billie Holiday. I just feel sad. I often cry. Feelings just come up and from where or why is mysterious. I let them flow through, like travelers. I don’t invite those sad wayfarers in to stay….cause they are just passing through. The universe just has some house cleaning to do in my psyche.

I once fought feeling sad, like it was some failure. I felt like I had nothing to be sad about or that I was ungrateful if I felt sad. “I should be thankful and happy!” If you wake up with an allergy attack and have hives, you can take a Benadryl, but it just takes time for the hives to recede. Being blue feels similar. I could take anti-depressants so I don’t feel so blue, so often, but those medications also tend to round off the corners of happiness too. I would not be deeply sad anymore, but I would also beÂ minimally happy, too. I have learned that I am okay with feeling full-strength emotions. I am not afraid of them. They just are what they are.

So, today I acted the Fransciscan monk. I labored in my gardens. Often tolling in silence. I filled my eyes with beauty from our world. I shed a few tears. I was kind to myself with fresh cold water and a hearty tuna sandwich for lunch. I didn’t beat myself up. I didn’t beat anyone else up either. Maybe I will play some music. Later, I could howl at the moon. Tomorrow will be another day and I will likely feel different. 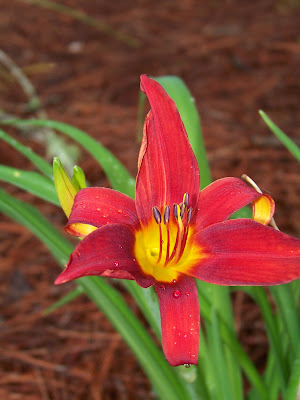